20,000 community health workers were financed by the German government for about ten years, but the program was terminated in 2006. At the German Agency for International Cooperation in Nairobi, no evaluation or final report can be found. The concept was probably outdated at some time I am told. Kenyans do know about contraception by now. In Kenya the Germans now promote a voucher program for contraception and maternal care, and against HIV. The subsidized voucher entitles the poor to treatment at a certified clinic of their choice. They call it “output based approach.”

In the county of Kitui I met Angelina who is still working as a community health worker – but financed by USAID. Various states operate in Kenyas health sector, promoting different ideas of how the health system should be in the future. That poses a problem to the Kenyan government which has in earlier years complained about the lack of coordination between the donor countries. 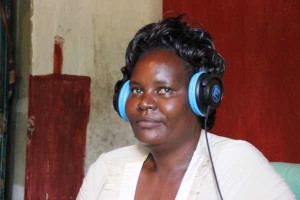 And my interview with Angelina casts some doubts on whether a few weeks of training is really enough for the health workers who work for little money. Angelina told me her ideas about condoms – that they were not really suited to prevent pregnancy. “During action the semen of the man has too much speed”, she said. It would bounce back from the tip of the condom only to reach the woman’s body via the back entrance.