If the Lake Victoria Program is the largest – with a  budget of around 130 million Dollars in its second phase – “Streetwise” is probably the smallest among the Expo 2000 projects. A project that costs nothing to any outsiderbut earns some thousand Dollars per year for a group of youth and young adults.

15 years after it becam an Expo 2000 project Streetwise is not easy to be found. The phone numbers do not work. Old web pages do not exist anymore. But finally through a writer by same name I finally get the email address of Lesley Lodge, the founder of the project who was invited to the World Expo in the year 2000.

„I had actually just moved back to the UK“, she writes. Streetwise is now run by some of my original boys in the project and their email address is below. Please say hi to them from me!”

Ishmail waits for me at the streetwise shop. He was one of the street kids. His parents had died, and his aunt’s home he was beaten, he had to work all the time with little food. He ran away at the age of 13, he recalls. “By that time the street children were very many, they welcomed me. The big boys used to send me to snatch some bags and bring for them.” He laughs out when he continues: “So they could appreciate me any time and protected me.”

Somebody offered him to contact „streetwise“ – and there he learned some skills he still is using. Art crafts and management, to calculate, the English language. The children earned some money with the clay pots they painted on. The funds enabled Ishmail to accomplish the eight years of primary school. Meanwhile Ishmail is 33 and he manages the project with three other former street children.  As in the 1990s they invite children from the Nairobi slums to learn handicraft skills and earn some money for their school fees. 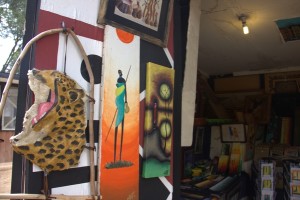 Most of the handicraft products in the streetwise stall are small enough for the flight baggage of tourists. The Utamaduni craft center has granted them a little stall next to the big house where tourists take a rest and go shopping after visiting the national park nearby. When I visit it, business is down. It is off season.

Aid projects which depend on just one single well-meaning person, have a bad reputation in the professional aid scene. Too much depends on this woman or man. Lesley lodge had already moved with her husband to England when she was invited to the Expo to Hanover in 2000. She had chosen a successor, who was to continue with the project in Nairobi.

In 2000 when Lesley Lodge had left the streetwise youth they were on their own this other manager. That man they say was keen to fill his own pockets with incoming money. Finally the children chased him out of the job, Ishmael says.  “Were just left with the shop. So you start from zero nothing in account. It is so difficult. The children went back to the street. Some opened little businesses.” And finally streetwise hat to close.

In 2008 Ishmail revived the project with three friends without any assistance from outside. At the time of my visit a dozen children from Nairobis slums keep visiting the streetwise workshop where they learn some handicrafts, in kind of a win-win situation. All of them including the four now adult street children make a little money with it. It is the old concept.

I call Lesley Lodge from Nairobi via Skype in England. She tells me she taught in Nairobi at a prep school. Once she invited children from the slums into her own arts class. She had no charitable project in mind.

“No way!” she shouts out.  “It was only a way of making my privileged children aware of what else was going on in Nairobi. That there were children of a similar age and were not as fortunate as they were.” But step by step the school project became bigger and bigger. The children began to paint flower pots. They sold them. Then they did other arts.  Lesley Lodge was able to “give them something little and of course each time a little bit plus bread and milk. It gradually built up. Then we were invited to go to exhibitions. And people heard about this. And it grew bigger and bigger. And for a couple of them I found jobs for in art related businesses. And the older ones started teaching the younger ones and that’s how it continued.”

Ishmail does not complain about Lesley who finally left them alone. “We were not angry because she did her best. We appreciate it. If it was not for Lesley our life could have been miserable.”