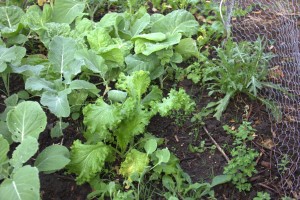 This is the only project in Kenya I could not find out about.

The Ministry of Home Affairs, Natural Heritage, Culture and Social Services which was named in 2000 as the main player in this project does not exist any more.

I asked experts in the field of agriculture, but I could not find out whether the efforts are still going on or what the results of the campaign were.

And here it florishes and thrives, along with … and … and … – as an international community in Cologne.

You are invited to comment and add to my observations. Does local produce still need promotion in Eastern Africa? Or is it widely accepted and cultivated?

At least one thing I can say for sure. Sukuma and some other local vegetables are widely consumed. During my visits I learned to like Sukuma Wiki – and therefore bought some seed for our garden in Germany. Now an international green community is growing peacefully together in our garden safely fenced against the greedy bunnies from Cologne. See the photo, there we have them: German Wilde Rauke (Diplotaxis tenuifolia), or wild Rucola, if you want it Italian, along with Kenyan Sukuma Wiki (brassica oleracea), Chinese Mustard (brassica juncea) and numerous wild herbs. I almost forgot to mention the German Butterkohl (Brassica oleracea var. costata) which seems to be a close relative to the Kenyan Sukuma, if I got the Latin names correct. But the Kenyan and the German cabbages taste varies quite a lot even though they are so similar in shape and name.